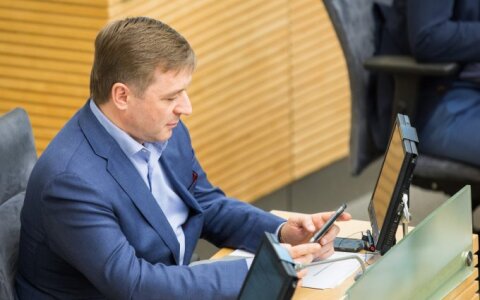 Ramūnas Karbauskis, leader of the ruling Lithuanian Farmers and Greens Union (LVŽS), says his Agrokoncernas does not violate any international agreements as it purchases fertilizers from a Russian-owned company that is not subject to sanctions.

The Lithuanian Radio and Television (LRT) reported on Thursday that Agrokoncernas buys fertilizers from the United Arab Emirates-based AgriculturalMinerals DMCC, which is controlled by Russia's Minudobreniya. Both Minudobreniya and its majority shareholder, Arkady Rotenberg, are under EU sanctions.

Karbauskis said almost all European and Lithuanian importers purchase fertilizers from that company.

Related articles
Seimas term at its midpoint: chaos only increasing
Bakas: some of the members of Širinskienė‘s commission should be investigated themselves

The LFU leader said he did not know who the company's owner is.

"Of course, I didn't know. I didn't know from what companies (Agrokoncernas) purchases (fertilizers), so how should I know? These are large companies whose owners change. They are probably listed (...) on the London Stock Exchange," he said.

According to LRT, Rotenberg, who holds more than 80 percent of shares in Minudobreniya, is Russian President Vladimir Putin's childhood friend who built a bridge linking mainland Russia to Moscow-annexed Crimea. The oligarch has been subject to international sanctions since 2014 over his close ties to the Kremlin leader.

Agrokoncernas admits that the fertilizes it buys in Dubai are delivered to Lithuania from elsewhere. The company would not say exactly from what country it imports fertilizers.

Under the Lithuanian Criminal Code, a violation of international sanctions is punishable by a fine, arrest or up to five years in prison. A legal entity is also held liable for such an offense.