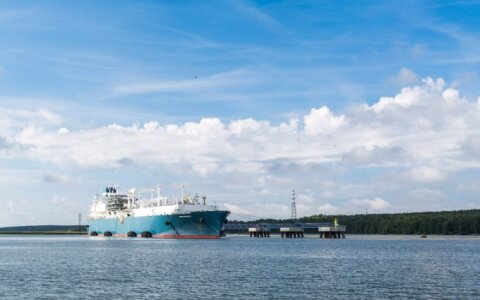 The legislation allows the country's state operated company Klaipėdos Nafta to purchase the FSRU vessel named Independence by the end of 2024.

The vessel is a part of the country's strategic LNG terminal built to ensure diversification of natural gas sources and Lithuania's energy independence.

Currently, Lithuania leases the FSRU vessel from Norwegian company Hoegh LNG. Before making the decision, Lithuania had been considering options of whether to continue leasing the vessel or purchasing it.

The Lithuanian Energy Ministry argues that the purchase would help cutting the costs of operating the vessel.

"This decision is based on rational logics, thorough calculations, is of strategic importance and most importantly useful for all gas consumers," said Lithuanian Energy Minister Žygimantas Vaičiūnas in a statement on Wednesday.

The country's LNG terminal in Klaipėda Seaport, western Lithuania, and its FSRU vessel Independence officially started its commercial operations on the first day of 2015 in order to provide energy independence from Russian gas.