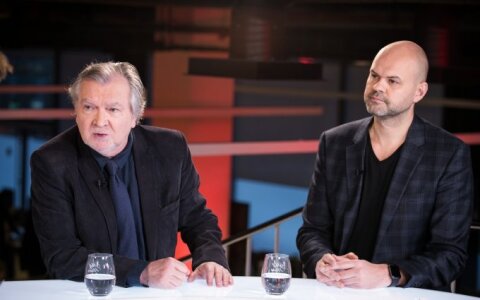 "The results were unsurprising," Spinter Tyrimai head, sociologist Ignas Zokas said regarding a survey commissioned by Delfi regarding the cabinet, Seimas and president's work.

The cabinet's ratings are a little higher – respondents rated the institution's work at 5.09 points, decisions in social policy – 4.85 points and 4.49 in tax policy.

Over almost a decade, President Dalia Grybauskaitė's popularity has declined by more than 20%. Currently, citizens rate the soon to depart president's overall work with an eight, while her foreign policy – a strong seven.

"The president's ratings depend less on domestic politics and more on other matters. Not on foreign policy, but what she said on what question, perhaps even completely unrelated to politics, perhaps some small misfortunes are decisive," Vilmorus head Vladas Gaidys said on Delfi Diena.

V. Gaidys observed that the correspondence scandal that occurred in May hurt D. Grybauskaitė's ratings so much that they still haven't recovered.

But why are the president's ratings so high in the first place? "I have been trying to find an answer to this for a decade and I have yet to answer, why her ratings are so high. Her image – that she is independent. She came and won in the first round with this image that she is independent from politicians, businessmen, family members, relatives, everyone. That's very important," V. Gaidys stated.

The president's work ratings compared to the cabinet and Seimas are rather high. The two institutions' work was rated at around five points by respondents. "The cabinet's position is likely the hardest because it is responsible for our daily welfare. That daily welfare is likely not the sort we may hope for, thus traditionally, the cabinet is poorly rated in Lithuania," another guest at the show, Ignas Zokas stated.

Meanwhile, the Seimas' ratings, according to I. Zokas, depend not on work, but on internal bickering. "This bickering is paid for by the tax payers' money at great cost. I believe that every member of Seimas has heard this from their voters a number of times. It is namely this impression of bickering and the negative image that creates this low rating," I. Zokas said.

More than a fifth of the country's citizens view Ramūnas Karbauskis an untrustworthy politician. Does this come as a surprise? "His ratings were very high (at the start of term). This was one of the most popular people in Lithuania," V. Gaidys stated and pointed out that the politician's ratings began to decline when he got involved in scandals.

"The stronger the stage lights, the greater the shadow. There are some, who support them fervently, but there is a part that dislikes them a great deal," I. Zokas stressed that the most notable polticians are either liked or disliked by the public.

Delfi reminds that D. Grybauskaitė's overall presidency was rated 7.94 out of 10 by survey takers.

The Seimas' work overall was mostly favourably rated by women, middle education, regional centre residents and the youngest (18-25 years old) respondents, however they latter often did not have an opinion at all.