LRT Investigation. The scattering Russian Alliance is hunting members: how did V. Tomaševski‘s Poles help it? 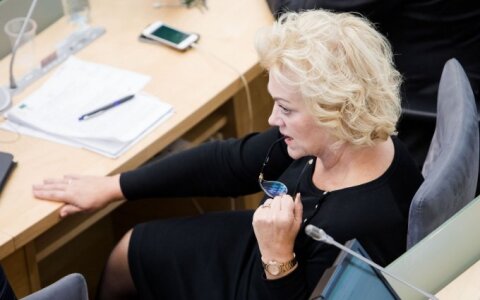 Russian Alliance leader Irina Rozova’s business trips are planned with the aid of the Russian embassy, meanwhile Russian Alliance members find out that they are registered in such a party from journalists, lrt.lt writes.

MP Irina Rozova, the factual head of the Russian Alliance, who works in the Seimas Electoral Action of Poles – Christian Families Union (LLRA-KŠS) Seimas group, was invited to the Eurasian Women's Congress, the main partner of which is Valentina Matvijenko, a member of Vladimir Putin's inner circle.

I. Rozova did not go to St. Petersburg for the congress because, according to LRT Investigation Department information, she was not granted permission by the Seimas board. The board received warnings from intelligence services that the MP was invited through the mediation of the Russian embassy in Lithuania.

The politician says that she did receive an invitation, but it was not sent from the embassy and denies knowledge of the embassy's participation. She notes that she also wanted to go to St. Petersburg because her son studies there.

According to the LRT Investigation Department, from the start of this year I. Rozova no longer has a permit to work with classified information.

With Viačeslav Titov, a member of another political party – the Russian Union, declaring in a Klaipėda city council meeting that Adolfas Ramanauskas-Vanagas show civilians, which led to a wave of protest and courts ruling that the councilman breached his oath, the Russian Alliance declared it would not vote for impeaching V. Titov.

Today, the Russian Alliance is on the verge of disbanding, with 1996 members – 4 fewer than necessary based on the political party law. The party may even have needed to reorganise or disband if not for aid from the Electoral Action of Poles. Up to 2016, when the political party law amendments were to come into power requiring 2000 members for a party to exist, the Vilnija region, which is governed by the Electoral Action of Poles witnessed active co-optation of members into the Russian Alliance.

The LRT Investigation Department has a list of people, who joined the Russian Alliance's ranks in the Vilnija region. Lithuanians, Russians, Belarussians, but mostly Poles from Šalčininkai, Vilnius and Švenčionys joined the Russian alliance, 200 members stem from the region. Most are civil servants in the Šalčininkai and Vilnius region municipalities, eldership staff, teachers, numerous retirees or just average employees.

Russian Alliance members not aware of their party, ask how to exit

A Lithuanian woman listed on the Russian Alliance roster, whose home address from 2015, phone and parents' address was not even aware of her membership, when contacted by LRT journalists. Others in similar circumstances were contacted. While not all agreed for their identities to be disclosed, in private, they agreed to tell more.

Some joined due to their Russian ethnicity or interest in Russian culture. They participated in Russian Alliance events, many of them being teachers, municipality and eldership staff.

Others, such as a woman, who identifies as Polish and worked in a certain private company in 2015 was surprised when the LRT Investigation Department informed her that she is a member of the Russian Alliance. She told LRT that she does not recall signing any documents regarding entry into the party and overall has no interest in politics. During the conversation, she did recall that she may have signed for a support event held at her workplace, but nothing beyond that. She also questioned, how she could exit the party.

I. Rozova says she does not believe that there are those in her party, who are not aware of their membership.

"Yes, we needed to fill out, there were increases in Klaipėda. I cannot believe this because a person, if they want to enter a party, must sign under. That's how it actually was," I. Rozova stated, though admits that if people are not aware, the situation is not normal and that they will review their membership list. She also notes that the Russian Alliance is not particularly active in East Lithuania, instead focusing on Klaipėda.

In regard to only two of a list of hundreds paying their membership fee does not come as a surprise – the Russian Alliance does not collect a membership fee from its members. The MP notes that with low interest in party activities in general in Lithuania, membership fees would be an excessive deterrent. Instead, I. Rozova tells LRT, the party mostly subsists off the board members' contributions.

Prefects tasked with gathering members for a sister party

Šalčininkai region Poškonys prefect RImantas Stočkus tells the LRT Investigation Department that his area is very mixed, with various parties seeking support. Instead, he and other Šalčininkai region prefects say, the main goal they are tasked with is increased voter turnout.

The goal is 50% activity, with 40 or 45% activity being an indicator of poor performance by the prefect, other prefects, who wished to remain anonymous said.

In some Šalčininkai region municipalities, there are more ethnic Russians, in some – less. Gathering people for the Russian Alliance in, for example, Baltoji Vokė was not difficult due to there being numerous Russians there. Meanwhile in Jašiūnai, the local community was angered – the prefect working there apparently demanded people join the Russian Alliance.

Vanda Kravčionok, Electoral Action of Poles in Lithuania Seimas group member, does not believe such talks. She also denies that the LLRA saved and continues to buoy the Russian Alliance from liquidation because the LLRA itself is balancing near the limit of required membership. As for ethnic Poles being co-opted into joining the Russian Alliance, she refuses to believe this and states this must be individuals consciously making such a choice.

The head of the LLRA, MEP Valdemar Tomaševski says that the increase in minimum party membership from 1000 to 2000 members was total nonsense and the cooperation between his party and the Russian alliance is an example for all parties in Lithuania, how to cooperate.

Nevertheless, the close cooperation between these two parties is controversial in both Vilnius and Poland, even among members of the LLRA. Some active Poles had to cede their positions to Russian Alliance figures and lost favourable positions on the electoral roll. However, the plan to enter the national elections under one roll together with the LLRA brought not only I. Rozova, but also more LLRA members into Seimas through the multi-mandate district.

Polish-Russian friendship marked by support from the Kremlin?

When asked if the LLRA saved the Russian Alliance from downfall, I. Rozova refused to confirm this, only stating that the two parties work together and need one another.

Klaipėda council member, political scientist Vygantas Vareikis, who has much to do with the Russian Alliance and Russian Union, another Russian focused party, says that Valdemar Tomaševski's scheme worked before the 2016 elections because responsible state institutions closed their eyes and did not see how the LLRA and Russian Alliance participated in the elections and what mutual aid pact was signed.

He explains that the scheme was as follows. Russian Alliance leaders Irina Rozova, Oleg Marinič, Tamara Šuklina, Andrej Kugmerov, Aleksandr Fiodorov and Natalija Viktorova depart the Russian Alliance and enter the electoral roll of the Electoral Action of Poles in Lithuania – Christian Families Union. This list, which was formally not a coalition, received votes from both Poles and Russians, allowing six politicians entry to Seimas. I. Rozova became an MP.

A number of Russian Alliance members, who entered the LLRA electoral roll and also figures in public organisations are controversial figures. Some of their activities have drawn the interest of Lithuanian intelligence, they are spotted in events organised by the Russian diplomatic representation. They often speak on the Russian propaganda distributing Pervyj Baltyjskij Kanal shows.

"But by arranging things this way and making a cunning play, V. Tomaševski, whose position is clear and is not favoured by Warsaw, but well liked by the Kremlin, this was created already prior to the previous elections, with the Central Electoral Commission (VRK) remaining silent under the lead of Mr. Vaigauskas," V. Vareikis says, noting that on their own, neither the Russian, nor Polish party could have gained so many seats in Seimas.

"Speaking of reality, a coalition was formed between the Russian Alliance and LLRA. Formally, it was just the LLRA. The Electoral Action of Poles in the Vilnius and Šalčininkai regions will always take and add on a vote or two. Such an entity should be called a coalition, it should have had the 7% barrier applied, which they are unlikely to surpass. Russian Alliance members were integrated into the LLRA's electoral roll and entered Seimas," the political scientist said.

Apparently, for this sort of cooperation, it was necessary to seek extra members for the Russian Alliance so it could continue to survive, something Poles loyal to local government aided with.

Neither the VRK, nor the Ministry of Justice can, at the moment, check, who and what members belong to, for example, the Russian Alliance and are from East Lithuania. There are no sanctions for political parties, who have citizens in their register, who do not know about their membership. Unless law enforcement institutions started an investigation on suspicions of the use of private individuals' data.

"Who could deny that through such methods, a political party ensured it has the minimum number of members stipulated by law, survived and continues to participate in all political processes? I believe the Ministry of Justice trusts information presented by parties," the incumbent head of the VRK Laura Matjošaitytė says.

However, if people have suspicions that against their will or without their knowledge, they could have been entered into a political party's lists, they can check in the Ministry of Justice website www.tm.lt/tm/partijos and contact the ministry to be erased from the lists of parties in whose activities they do not wish to participate.

LRT Investigation. The scattering Russian Alliance is hunting members: how did V. Tomaševski‘s Poles help it?