Do we conduct our foreign policy in line with the US or with Putin’s Russia? 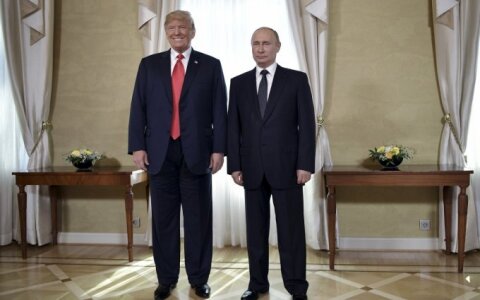 Last week’s news that, for the past two years, the Government led by Foreign Minister Linas Linkevičius has been covertly negotiating a draft Global Compact for Safe, Orderly and Regular Migration at the United Nations caused quite a stir in Lithuania. The turmoil following the revelation of this fact has not subsided yet. Interestingly, none of the Seimas committees in charge of foreign policy and national security have been informed about the negotiations. The reason behind this was obvious. Both publically and behind closed doors at a meeting of the Seimas Committee on Foreign Affairs, government members failed to provide answers to some of the essential questions: why do we have to approve this questionable agreement and who has decided that Lithuania supports it?

Minister Linkevičius, in turn, has limited himself to repeating some misleading statements in that the approval of the text of the Global Compact will not carry any implications. However, this brings us to yet another question, i.e. why do we need to sign this agreement altogether? The document does indeed say (as do most UN documents of similar character) that it is not legally binding. The practices of international law, though, indicate that, once approved, the provisions of such declarative documents are, in the long run, incorporated into the legally binding legal acts of other organisations, such as the European Union.

In other words, agreements of the kind provide a normative basis for subsequent legally binding documents. Their approval, therefore, requires deep consideration based on the economic, social and national security criteria of Lithuania. They should likewise be subject to wide political support following their full presentation to the public.

It is also important to understand the reasons why many key Lithuanian allies, such as the US, Poland, Israel, Estonia and other EU Member States, do not approve of the Global Compact. However, our government members have failed to do their homework and have only submitted arrogant explanations about the mystical bewilderment of the politicians of the said countries. In the meantime, the facts about the group of countries in favour of the agreement are truly telling and merit a separate discussion. The group consists of African, Middle Eastern and Asian countries suffering from demographic surplus and deprivation. The group also includes Russia.

In order to understand Russia's intentions, it is worth recalling what started the downfall of German leadership and the undoing of Chancellor Angela Merkel in Europe. The statement (whether actual or its misinterpretation) by German Chancellor that all refugees are welcome in Germany has given the green light to new flows of migrants.

It should be stressed that Merkel's statement was in no way similar to a legally binding legal act or agreement. Rather, it was a political message which was soon after taken on board by the communities of the third world and shadow networks of human traffickers.

While Merkel has seen her popularity drop, the influence of radical parties and movements has grown, and so have Russia's opportunities to change – if not now, than at a later time – the German policy towards the East through them. Similar scenarios have already unfolded in other western and northern European countries, which have initially been very enthusiastically open to immigrants. Therefore, the UN Global Compact on migration, which promotes openness of western political and social systems, may repeatedly play out a scenario that is all too familiar to Europe.

It must be underlined that high levels of immigration cause cultural and social challenges. According to Robert D. Putnam, a renowned American political analyst, multiculturalism leads to the fragmentation of society.

When analysing the case of the US, Putnam observes that communities living in areas full of diverse ethnic groups, as opposed to more homogenous communities, suffer from greater loss of trust in other people and in other groups.

As noted by Vytautas Keršanskas, an expert on information security, the Kremlin pursues its foreign policy with the aim of highlighting the divide between the public and the authorities, exploiting the alienation of societies, and promoting the sentiments of opposition.

While the Western world fails to provide a sustainable solution to the integration of closed communities into their societies, out-of-control migration is creating an environment which is conducive to the Kremlin's policy of discord. Even the leftist leaders have already recognised this. For instance, Hillary Clinton has recently stated that the European leaders need to get a handle on migration because that was what lit the flame.

'I admire the very generous and compassionate approaches that were taken, particularly by leaders like Angela Merkel, but I think it is fair to say Europe has done its part and must send a very clear message – "we are not going to be able to continue provide refuge and support" – because if we don't deal with the migration issue, it will continue to roil the body politic,' said the world-famous US Democrat.

Clinton's statements indicate that, despite the disagreements with the administration of the US President, which was the first to announce its withdrawal from the UN Global Compact for Safe, Orderly and Regular Migration, the problems caused by uncontrolled migration are becoming obvious to the leaders of the US Democratic Party, too.

The UN Global Compact for Safe, Orderly and Regular Migration has divided the civilised world into two camps, namely, the Euro-Atlantic part of the world (Australia included), which will, in the long run, be made responsible for the enforcement of the provisions of the agreement, and the part of the world composed of third countries, which will be taking advantage of the opposite camp.

We must be clear in saying that the Global Compact is a political document which entails political commitments for a state. Therefore, this agreement may become an instrument for exerting pressure on a signatory state in the future. Approval of the statements contained in the Global Compact would basically mean that we are voluntarily willing to make the same mistake twice. Meanwhile, from the Lithuanian foreign policy perspective, this would also translate into obvious support for Russia's interest to weaken and divide Europe.

Do we conduct our foreign policy in line with the US or with Putin’s Russia?