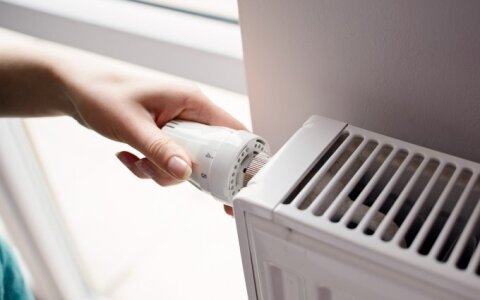 Start of a new heating season not only boosts household bills for the municipal services, but also calls for attention towards heat sufficiency. Despite the above-zero temperature up to the mid November in the country, Lithuania has been the least successful in passing the test of colder temperatures in the Baltics – homes in Lithuania provide the least comfort to their residents, a press release from Rockwool states.

Only 35 % of residents in Lithuania claim to feel warm and sufficient fresh air in their homes after district heating has started in their homes. According to the representative survey among residents in the Baltic States by market research company Nielsen, 45 % of Latvian residents and as many as 47 % of Estonian residents feel comfortable in their homes.
“Given that in Lithuania, we have a lot of old and unrenovated apartment blocks built in the Soviet period, the outcomes do not come as a surprise. Home is considered to be one of the key and most valued investments, and we can only wonder why people take absence of comfort as a given,” – Dr. Andrius Buska, Technical Manager at ROCKWOOL, stone wool manufacturing company, which has initiated the survey, has shared his thoughts.

District heating doubtlessly continues to be the most convenient option of residential home heating. According to the survey, 39 % of urban and 28 % of rural residents are satisfied with the advantages of district heating. This said, 28 and 21 % of the people respectively have mentioned that they would prefer more fresh air in their homes.

“Whichever way you look at it, avoiding the necessity of taking care of the fire wood, coal or wood granule stock or stove or fireplace firing is an important factor for many people. In the case of district heating, both the fuel and the provision of heat are the tasks for the service provider. On the other hand, lack of fresh air reported by a considerable share of the population also signals certain potential issues or even the attempt to retain heat by avoiding to vent the home, while venting every single day regardless of the season is actually a must,” – the expert claims.

The survey has also shown that 8 % of urban citizens consider their homes to be warm and claim to not have any venting issues, while 7 % claim that their homes are unpleasantly cold and lacking fresh air. These issues are less frequent in rural areas – only 3 and 4 % of such households respectively.

28 % of homes in Lithuania are not equipped with the district heating, the highest rate among the Baltic States. Latvia has 20 % of such homes, Estonia – 24 %.

According to A. Buska, the differences are determined by the fact that in almost half, or 44 %, of homes in Lithuania’s sub-regions do not use heat supplied by district heating system, and there are only 18 % of such homes in the cities.

“Urban residents have more options regarding individual heating of their homes, while in sub-regions, we are talking about the simplest solutions – a stove or a fireplace, which are present in virtually all private houses. This enables the residents to adjust the heating requirement and intensity as they wish, but, at the same time, they have the duty of regular maintenance of the stove or fireplace, keeping cleanliness and ensuring capacity of the flue channel, and should not let the firing process take its natural course. Intensive use of high calorific value fuel may lead to a spark going up high or catching fire, and the soot in the chimney will start burning,” – the expert at ROCKWOOL has noted.

Heat Loss Through Walls and Roof

A popular myth that considerable share of heat is lost through the windows has been negated by experts who have calculated that windows account for the loss of 15 to 20 % of heat. The main issue behind a cold home lies in the non-tight and uninsulated walls, roof and floor structures, which let about 70 % of heat outside into the air.

According to A. Buska, if you can notice coldness, unpleasant chill, lack of fresh air in your home, you should consider its weak spots.

“A home with inadequate thermal insulation which responds to the outdoor temperature fluctuations too soon is the cause of more than just health issues or discomfort. To fill their homes with heat, people are exploring various options, and an electric heater as an additional source of heat is not the worst idea, although it increases their electricity bills and dries the air. The most dangerous decision would be to simply ignore the poor climate inside, try to not vent the home in order to retain the heat. Stagnant air, heat and moisture are an ideal environment for microbial growth and mould, and lack of oxygen, even though almost unnoticeable, is a very important factor of poor health condition,” – A. Buska has claimed.

The representative survey of 4821 respondent, 1607 of which were the residents of Lithuania, in the Baltic States was conducted by market research company Nielsen in October 2018.