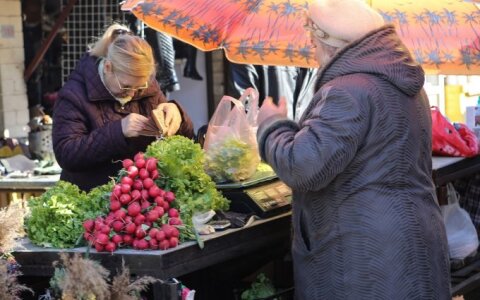 The government has taken aim at the informal economy, just as many prior to it has. This time, the construction sector, meat produce trade, healthcare institutions and minor traders are in its sights, lrt.lt writes.

The prime minister's advisor Skirmantas Malinauskas explains that it is especially hard to monitor sales in markets. This, he says, should be remedied by ensuring VAT is gathered, which should be made much more efficient by digitising the sales transactions.

Many owners of small farms take their produce, a sack of potatoes here, a basketfull of eggs there to the markets and thus make a living, however the transactions often remain informal, appearing on no tax sheets.

Free Market Institute head Žilvinas Šilėnas notes that the solution to such situations is improvements to the tax system, with current excises in Lithuania being higher than in Germany and other countries. According to him, the digitisation of marketplaces is unlikely to bring them out of the informal economy.

Related articles
Lithuania's 2019 budget to get around EUR 200 mln "out of shadow", finmin says
President signs laws on tax overhaul

"The cabinet first needs to make a decision because currently it is acting in a sort of schizophrenia – one day they curse the markets and on other days they praise them. One day the markets are competition, places for small farmers to sell their goods and the place, which the government will encourage, but two weeks pass and it is once again a lair of the informal economy. In my opinion, in terms of digitisation, based on the cash registers needed in Lithuania, they are among the most difficult," the head of the Free Market Institute stated.

The minister of finance has already put the matter into numbers. According to him, this year 200 million euro was extracted from the informal economy as planned and the same sum should emerge next year.

"There are several areas. If we are to talk about sectors, then of course we have the construction sector, the car repair sector. Overall, not based on sectors, but on the level of concealment, there is off the books wage payments. Of course, these areas are contracting and quite rapidly," Minister of Finance Vilius Šapoka said.

The ministries, as well as the State Tax Inspectorate, State Veterinary Service, Customs Department, Police Department and other institutions have been tasked with preparing plans by mid-February or March to counter the informal economy.