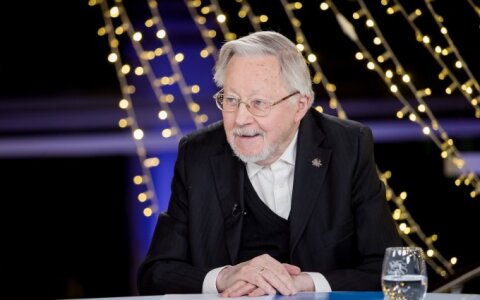 “I hope that things will not be all bad in Lithuania, that we will avoid various collapses, violent actions, against the opposition for example. We are constantly beset by various scandals involving the government, the cabinet. While performing investigations on prior cabinets, it is time to prepare for investigations on this cabinet’s work and mistakes, which may or may not be malicious. There are things to investigate,” professor Vytautas Landsbergis says. On the starting year and what to expect in both domestic and foreign policy, a discussion on Delfi’s Dėmesio Centre with politician Vytautas Landsbergis.

With rumours revolving around the potential for neighbouring Belarus being absorbed by Vladimir Putin's Russia having become particularly prominent, V. Landsbergis notes that this is a distinct possibility, with only technicalities remaining despite Belarussian President Alexander Lukashenko having initially been opposed. The veteran politician also highlights that Belarussian border control is already performed by Russia and that if a new state was formed from the merger with Russia, V. Putin could thus circumvent restrictions on term limit imposed by the Russian Constitution.

Related articles
LRT Investigation. R. Karbauskis’ secretive business in Belarus. What did the politician seek to hide?
Kęstutis Girnius. The restless year of 2019

"Belarus was seen as just another victim in the epoch of Putin's wars. Now is the epoch of Putin's wars. Ever the new war against ever a new opponent, object or territory, which must be taken to feel ever greater. Now it can be trumpeted that look, we have taken Minsk. Everything rises from the same thinking. We also wondered if the Baltic States will not be the next target, the next victim because the war machine needs victims," V. Landsbergis stated.

He notes that Belarus does not have any choice in the matter and questions whether there is even desire remaining for an independent state, stating, "The owner [Vladimir Putin] ordered and Alexander obeys. And the Belarussians themselves, their public, their political groupings, they also won't have any will."

V. Landsbergis does concede that matters may hinge on A. Lukashenko's desire not to lose face, but even then lacks leverage despite having been given hope some twenty years ago in signing an agreement with Boris Yelcin to perhaps become the head of a united Russia and Belarus.

"Belarus may have been allowed to pretend at sovereignty for a time by not recognising the occupations of Abkhazia, South Osettia. There were options to use it. After all, Moscow proposed to the West that if a peacekeeping corps was decided on, it could be formed from Belarussian troops. It is a childish game, but you can play it while Belarus exists. Now it is irrelevant and everything is withdrawn. Now you can show the nation [Russia] that we have united and it is yet another victory of the great leader [Putin]. Why not?" the politician nevertheless adds.

In regard to the looming Ukrainian elections, V. Landsbergis states that while there is much confusion between the various candidates, making it hard to guess the outcome, nonetheless, a Ukrainian nation has formed and alongside it – a military and the ability to act. Namely this, the politician points out, is the greatest challenge and insult for V. Putin, the concept that Ukraine does not want to be ruled by him and is looking to the West.

Due to this, V. Landsbergis says, military aggression has intensified and expanded into the waters, given the recent aggression at the Kerch Peninsula. Furthermore, he adds, such actions could well expand beyond Ukraine and toward even the Arctic, which Russia has been staking claims on.

"However, the first signal is the Sea of Azov and this is where the democratic world looks hopeless, even fears naming it. Of course, the Ukrainian government did not identify it as piracy. But after all, that's what it was, piracy on the open seas, the taking of ships and people. In the olden days, this was punished by hanging, but now the Kyivan government did not accuse Russia of piracy," V. Landsbergis remarks.

Regarding US President Donald Trump's move to have US troops withdraw from Syria, V. Landsbergis states this is an important signal, which is bound to cause confusion and chaos in the American military leadership, as well as disappointment. V. Landsbergis highlights Jim Mattis' resignation as Secretary of Defence and how the former general emphasised in his resignation letter the point of loyalty to one's allies, failure to do which is, according to Landsbergis, a slight to a serviceman's honour and let to the resignation. The politician notes that no one is sure where exactly the decision stemmed from or what the plan is behind President Trump's move, but muses that perhaps, as poor a decision as it may be, that it was done with the intent of burdening Russia with the circumstances surrounding Syria.

"Currently you can blame everything on the USA, saying that it is to blame everywhere in the world. America was also to blame in Syria, but now if will no longer be to blame, then who will be? Of course, the USA made a misstep before and things turned very bad, but that will not continue for long," V. Landsbergis states, though cautioning that this withdrawal could, in turn, be used to cause another flood of refugees headed toward Europe.

Returning to domestic politics, V. Landsbergis views President Dalia Grybauskaitė's New Year address as a serious warning regarding illiterate populism and aggressiveness. The politician muses that following all the commissions and investigations of prior governments by the incumbent one, it's turn could well arrive following the elections, no longer having the cover of a majority in Seimas.

Regarding what is seen by some as the most acute confrontation in the country's politics to date, between the current majority and opposition, V. Landsbergis emphasises that the Homeland Union – Lithuanian Christian Democrats [TS-LKD], the largest opposition party, has attempted to cooperate and work was thus done regarding forestries and Lithuanian Railways reform. However, he points out that on other matters, the choice was to seek destruction.

"I think that militant illiteracy firstly manifests through militancy. As for how to destroy somehow elegantly, they do not know how and are slow studies. The idea itself, the goal is bad and unseemly towards the state. First, we will destroy our enemy and then we'll see. However, this "enemy" [the TS-LKD] has the mental capacity, you can work together. But no, you have to destroy no matter what because we know better. The prospects are poor," the politician muses.

As for his hopes for the new year, V. Landsbergis hopes, "That things will not be all bad, that we will avoid various collapses, violent actions, against the opposition for example. We are constantly beset by various scandals involving the government, the cabinet. While performing investigations on prior cabinets, it is time to prepare for investigations on this cabinet's work and mistakes, which may or may not be malicious. There are things to investigate. I hope that over the year, more wisdom will appear or perhaps more fierceness and more blood. I hope that it will be more wisdom and less blood."