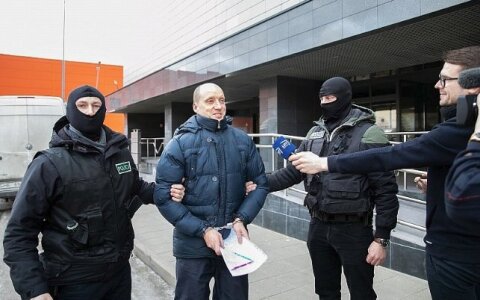 A total of 26 persons, including eight judges and five lawyers, were detained in Lithuania on February 20 due to suspected corruption in the country's judicial system, said Lithuanian Prosecutor General Evaldas Pašilis.

"The detainees are suspected of having committed serious crimes related to acting in organized groups. It is suspected that bribes ranging from 1,000 to 100,000 euros were promised and paid in return for various favorable judges' decisions," Pašilis told a press conference held together with leadership of Lithuania's Special Investigation Service (STT).

According to the data collected during the pre-trial investigation, the size of agreed bribes may amount to 400,000 euros (454,657 U.S. dollars), Pašilis said.

The case is unique not only because of the scale of corruption or the size of bribes, but also "for the consequences for the whole society", Pašilis underlined.

"These are someone's selfish, unlawful decisions, pushed forward in the name of the court. These are the fates of the affected people, (and) it is an undelivered justice. It is hard to talk about it today as such unlawful acts are undermining confidence in all justice," Pašilis said.

Žydrūnas Bartkus, director of STT, said that the entire system of allegedly criminal judges' activities was disclosed, while decisions made by suspected judges will have to be reviewed.

"One of Prosecutor General's Office in the nearest future will review the cases dealt by corruption-related judges and assess whether those decisions could have been affected by corruption," Bartkus said.

The detained judges' length of service in the judicial system amounted from 24 to 32 years, head of STT added. In his words, the scale of the case is "probably the largest in the history of STT with nearly 100 officers involved and 100 searches executed.

"This pre-trial investigation is a signal to the entire judicial system that cardinal decisions and changes must be made in order to prevent any possible manifestation of corruption," Bartkus said.
Lithuania's President Dalia Grybauskaitė signed decrees to prosecute, arrest or otherwise restrict the freedom of 8 judges suspected of corruption, the president's office announced earlier on Wednesday.

Commenting on the decision, Grybauskaitė emphasized that making courts more transparent was her priority in both terms of office. The head of state expressed her hope that in the future law enforcement will have enough resolve to combat the most serious forms of corruption.

Meanwhile, Lithuanian Prime Minister Saulius Skvernelis said that the case showed that serious problems existed in the country's justice system. He noted that the scope of the problem was highlighted by the fact that judges suspected of corruption work at the Supreme Court and the Court of Appeals among others.

"The state must cleanse itself, the system of selection and verification of judges has to be improved, self-regulation institutions have to work better, additional safeguards have to be introduced," Skvernelis wrote in his Facebook profile.