Tautvydas Marčiulaitis: We are living better than ever before 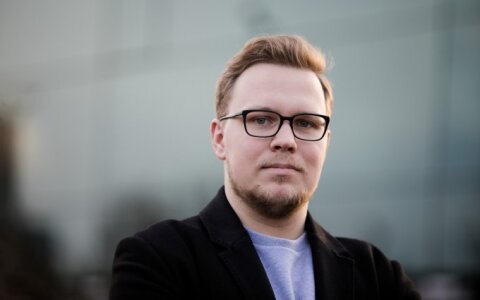 We have just celebrated the 101st birthday of Lithuania and it seems that this occasion is becoming more meaningful and beautiful with every passing year. Streets are filled with smiling people proudly waving the country’s national flag, and the whole atmosphere is more festive. And it is not surprising why – every year we are living better than ever before.

Of course, when you have been occupied half the time during those one hundred years, living better does not sound so difficult, because freedom, in any kind of conditions, is better than the most perfect prison.

Probably some would disagree with that because instead of having real possibilities they prefer to get a steady pay for a fictitious job while speaking only what is allowed. However, we should not think about them and ruin the festive atmosphere for ourselves. It is true that for most people freedom brings more and more joy and we can prove that by giving some objective facts.

Related articles
Economists: Lithuania has not been this well off for hundreds of years
In the last 2 years, number of MPs declaring their meetings with interest groups or lobbyists doubles

According to the World Bank data, 24 years ago in 1995, the annual GDP per capita in Lithuania was $2168. It was not a pleasant number considering that globally the average GDP per capita was $7173. Therefore, out of 235 countries included in the statistics that year Lithuania was 111th.

In other words, only 24 years ago we were somewhere in the middle of the list at best. Including all countries from Africa, South America and even such small states as Nauru it meant that we were ahead only of the so called Third World countries. We could only have dreamt of competing with Western Europe and North America. And we did but this dream seemed to be very far away.

However, during those years Lithuanian economy was boosting. It grew more rapidly than in many other states in the World. For example, let's take that an average Worldwide GDP in 24 years had increased from $7173 to $13 398 (which is 87%) per capita, whereas in Lithuania the same rate had increased 6,7 times. It means that for one inhabitant in our country the GDP rate had increased from $2 000 to nearly $17 000. As a result of this steady economic growth, we have already surpassed more than 50 states and in 2017 only 54 countries have a higher GDP per person than us.

If we would compare with other countries that have lived under Soviet oppression we would see that today an average GDP per person in Lithuania is eight times higher than in Moldova, five than in Ukraine, four times bigger than in Armenia, Azerbaijan and Georgia. As well as almost three time as the one in Belarus and almost twice as in Kazakhstan.

Yes, we are still almost twice behind the EU average. Nonetheless, not so long time ago, in 1995 it was 9 times worse. Furthermore, we are ahead of countries as Hungary, Romania, Portugal and almost reached the same level as Czech Republic and Slovenia.

If we would look at the classification "Europe and Central Asia (apart from countries with a very high income)" composed by the World Bank, we would notice that on average the GDP of these countries for one inhabitant is only $7947. To that end, we could consider Lithuania as a fairly wealthy country.

It could be confirmed only by comparing the growth of the average wage. In 1995 an average inhabitant in Lithuania would not have received even 100 euros per month. Taking into consideration that from 1995 to 2018 the average inflation in Lithuania was around 5%, 100 euros back in those days are almost equal to 350 euros now.

Hence, back in those days a person with an average wage could buy less goods and services than a person owning a minimum wage today.

Comparing with other ex-Soviet countries, wages in Lithuania are similar to the ones in Latvia and about 30% smaller than in Estonia.

But, they are more than 30% higher than Russian and more than twice as high as Kazakhstani, Georgian, Belarusian or Armenian wages. In Lithuania on average people earn three times more than in Azerbaijan, Moldova and Ukraine. And four – five times more than people living in Turkmenistan, Uzbekistan and Tajikistan.

Even though less than 30 years ago we were among these countries, today we do not even want to be compared with them. Most would be annoyed and would say that it is not a big accomplishment to tell that we live better than these countries. And yet, these are the countries that making a comparison with brings at least some logic. It would absolutely worthless to compare ourselves with Scandinavian states or Germany.

The only indicator that does not bring much joy in all of these statistics is the population change. In 1995 there where 3,5 million in habitants in Lithuania. Today we are 2,8 million. This factor gives the ground for various populist. They state that we have sent away one million of our own brothers and sisters.

But in reality nobody sent them away. Actually they were granted with a right to choose where they want to live. If somebody would have given us this right before 1990 the situation would have been far worse. Also looking from the other angle, one million chose to leave, but 2,8 million decided to stay.

And for that the ones who stayed they can feel happy even more. During the time when the majority was running away from the economic crisis and were looking for higher wages abroad, foreign direct investment to Lithuania increased around 67%. These investments did not only create financially and socially attractive jobs, but also boosted the creation of small and medium businesses.

That is why the majority of those who were not afraid of the challenges and stayed here during 2009 – 2010 have created good lives in Lithuania and can boast about receiving wages that are not so far from the EU's average. And some working in more specific sectors are used to earn more than an average European.

This list of all these wonderful things that happened to us over 20-25 years is far from being complete. If we would take any random statistics or number, we would see that life in Lithuania is better and easier than ever before.

Even everyone is complaining about enormous housing prices, we could state that conditions to buy your own property now are the easiest during the whole period of Lithuania's independency. In other words, more people today can afford housing than ever before.

All of these objective facts and data can be converted to the smiles we see in the streets. People are happier and the quality of life is getting better. That is why there are more fancy cars on the streets and the SPAs in Druskininkai are almost always fully booked. But most importantly, we feel that love for our country is increasing and every year more and more people want to celebrate the birthday of Lithuania. Of course, we can always choose to ignore this and find something to complain about. Like as part of citizens of Switzerland, Austria, Sweden or Norway do.

But sooner than later complainers will become the absolute minority. The vast majority of citizens already understand that we are a European state not only by de jure or geography, but also by our economy. Therefore, accusing your state rather than yourself for real or fictional evils is becoming more stupid than ever before.

Tautvydas Marčiulaitis: We are living better than ever before