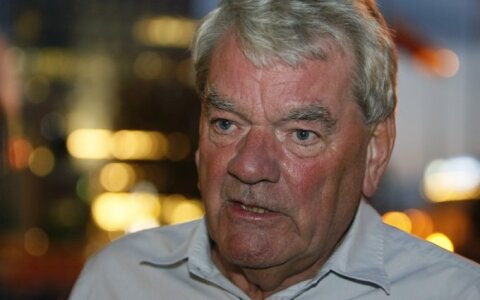 He voiced his plans in response to reports that Irving has plans to visit several countries in the region in the fall.

"I will turn to the Migration Department shortly with a proposal to put him on the list of unwelcome persons," Linkevicius told BNS Lithuania. – Spreading his views of denying the Holocaust and idolizing Adolf Hitler is a crime in Lithuania and we cannot allow committing such crimes."

Linkevicius says the available information allows suspecting that Irving, who has already announced his plans to visit Poland in September, might also visit Lithuania.

"There've been reports on his tourist trip to Latvia, Poland. It might be so that he might come to Lithuania as well. I want to say straightaway that such persons are unwelcome in Lithuania and spreading of such views is unacceptable," the Lithuanian foreign minister said.

Under Lithuania's Penal Code, a person who publicly condones or grossly trivializes the crimes of the Nazi Germany and Soviet Union faced up to 2 years in prison.

Polish Foreign Minister Jacek Czaputowicz said last month that his country would probably also bar Irving from coming as the denial of the Holocaust is also banned in Poland.

The author of several books, Irvin denies the fact that the Nazis killed 6 million Jews during WWII.