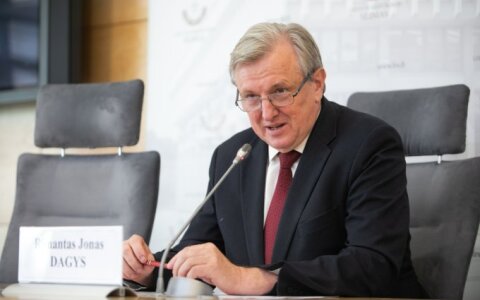 The opposition conservative Homeland Union – Lithuanian Christian Democrats on Tuesday decided to suspend MP Rimantas Jonas Dagys' party membership for a year due to internal violations. It was also decided to remove him from the list of candidates for the upcoming general election.

"The supervision committee (…) concluded that Mr. Dagys violated the party's statute (…) and applied the party's liability measures by suspending his membership for a year and banning him from standing for election in the upcoming Seimas election," the committee's chairman Valdas Benkunskas told journalists.

In his words, such a sanction was applied for the violation of four points of the party's statute.

The ban for Dagys to run for parliament still needs the approval of the party's presidium.

Earlier on Tuesday, Dagys announced his own decision to suspend his party membership, claiming that the party's liberal leadership is persecuting him for his opinion.

The HU-LCD has the largest opposition group in the Seimas with 35 members.

Dagys, who's been the party's member since 2002, has not disclosed yet whether he plans to leave the political group.