Most-advanced US fighter jets land in Lithuania for 1st time 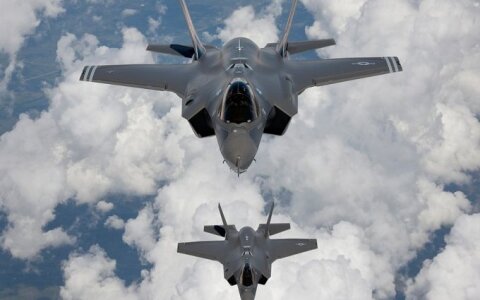 Such visits are usually seen as a symbolic gesture underlining the United States' commitment to NATO's collective defense, and also sending a message to neighboring Russia.

The hardly radar-detectable fighter jets arrived in Siauliai from Poland where an US-led air defense exercise is taking place.

"This air defense exercise held for the first time sends a strong signal that the U.S. is ready to respond to the changes in security environment rapidly and to contribute to the defense of the Baltic states if necessary," acting Minister of National Defense Raimundas Karoblis said in a comment sent to BNS Lithuania.

Related articles
Borisov makes money from Lithuanian army and border guards
U.S. Ambassador: NATO is stronger with Lithuania, and Lithuania is stronger as a part of the Alliance

Lockheed Martin's F-35 production program is deemed the most expensive weapons development program in the history of the United States.

Turkey also wanted to acquire such jets but the US rejected its request after Turkey decided to buy an S-400 air defense system from Russia.

Most-advanced US fighter jets land in Lithuania for 1st time