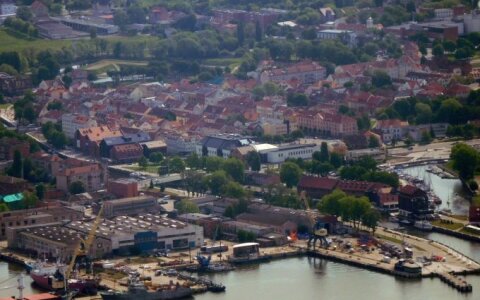 Stemma Group, a company controlled by the family of Martinas Gusiatinas, plans to invest around 100 million euros into the Memelio Miestas (Memel City) project in the territory of Klaipeda's former ship repair company Laivite in central Klaipeda over the next ten years.

Last year, the group said its investment would amount to 40-70 million euros.

Nerijus Tilindis, head of Stemma Management, part of the Stemma Group, says the planned investment grew in size after a closer look at what could be built in this territory.

"On the one hand, it's a certain reserve. (…) We have also estimated a certain increase in the labor costs and the future costs over the course of the implementation of the project," he said.

In his words, the company plans to borrow to cover part of the project costs, and will also invest its own funds.

Offices, residential and commercial building, public objects, car parks and public areas will be built in the 7 ha territory, he said.

"We will have everything, and we could also have public-purpose buildings, therefore, we are holding talks with the city on what could be needed and how we could probably implement some joint projects for that territory to be a city within the city," Tilindis said.

The whole project will be implemented in staged and should be completed by 2030.

Stemma Group acquired the territory from Litectus, a real estate company which is part of the SEB group, in June. Litctus bought it at an auction for 9.56 million euros in 2013.

In November, Stemma Group sold its stakes three wind farm companies Vejo Vatas and Vejo Gusis to Lithuania's state-run energy holding Lietuvos Energija (Lithuanian Energy) for 21.76 million euros. And in 2008, the group sold its majority stake in Klaipedos Smelte, one of the largest cargo handling companies in the port of Klaipeda, to Switzerland's Terminal Investment for an undisclosed value.