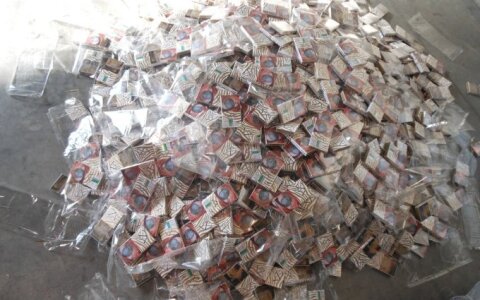 A Renault truck driven by a Russian citizen was stopped after entering from the Russian region of Kaliningrad. The driver claimed to be taking a shipment of plastic granules for a company in Kaunas District. But the officers became suspicious after X-raying the vehicles.

After opening the truck's doors, they found boxes of cigarettes without even any attempts to disguise them. All in all, 653,000 packs of Russian New Line NL cigarettes were found inside.

The driver was detained for two days, and an investigation was launched.

Figures from the Lithuanian Customs show smuggled cigarettes detained on the Lithuanian-Russian border in 2017 made 1 percent of the total, rising to 11 percent last year and to 40 percent so far this year.