Linkevicius: Belarus offered with help to diversify its energy imports 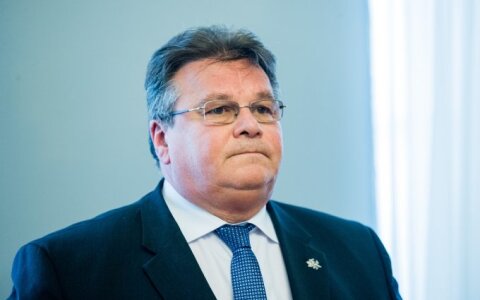 Foreign Minister Linas Linkevicius told his Belarusian counterpart, Minister Vladimir Makey, on Wednesday that Lithuania could help the neighboring country to diversity its energy imports to ease its reliance on Russian energy supplies.

"We spoke about the fact that Lithuania could contribute to the diversification of (Belarus’) energy supplies and we could do so by using own capacities or in cooperation with Poland," Linkevicius told BNS after the meeting.

"We could hardly expect many answers, but it seemed to me that there was interest," he said by phone from New York.

Vilnius considers proposing that Belarus import oil via Lithuania to help it reduce its dependence on Russian energy resources.

Both ministers are in New York for the UN General Assembly.

Their meeting came after Gitanas Nauseda, who was sworn in as Lithuanian president in July, said that he would seek to gradually reopen dialog with Belarus.

According to Linkevicius, Moscow’s influence on Belarus is clearly increasing.

"We are interested in Belarus retaining its sovereignty, as far as it is possible (...)," Lithuania's chief diplomat said. "I believe that dialog between Belarus and the European Union should also help mitigate the situation that is now emerging."

"The absence of dialogue would benefit Russia, but not the European Union, Lithuania and, as a matter of fact, Belarus itself," he added.

Linkevicius: Belarus offered with help to diversify its energy imports