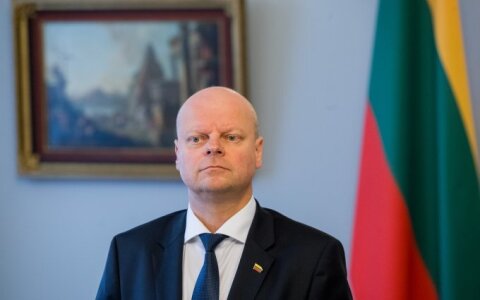 Lithuanian Prime Minister Saulius Skvernelis, who is being treated for lymphoma, says he took sick leave on Monday and Tuesday because he had a fever, and expects to be back in office on Wednesday.

According to Skvernelis, medical tests had to be conducted to make sure that the fever was not caused by an infection.

"I had to spend a couple of days in isolation; the necessary tests were carried out and showed that everything was fine," the prime minister said on Facebook on Tuesday. "There's no infection, and the elevated temperature was simply the body's reaction to the medicines used after the chemotherapy treatment."

"I'll be back at work tomorrow!" he added.

The prime minister thanked those sincerely concerned about his health, but noted that some politicians had already start spreading rumors about his allegedly very poor condition.

"(Here's) a separate word for my 'fellow' politicians who giggle when speaking about my health condition, saying 'there are cemeteries full of those irreplaceable', or are spreading gossip in the Seimas that the prime minister's condition is so bad that the treatment doesn't help, etc.," he wrote.

"I must disappoint those people: there'll be no post-funeral reception. You'll have to get your refreshments on some other occasion, at another event."

"Apparently, not everyone's able to understand what ethics, decency and basic humanity are. All of us have the right to a temporary incapacity to work, no matter what disease we suffer from," he added.

The prime minister cancelled a scheduled meeting with his Norwegian counterpart, Erna Solberg, who visited Vilnius on Monday, due to his health condition.

Skvernelis said in late August that he had been diagnosed with stage 1 lymphoma, a type of blood cancer, and would not be able to work on some days due to the ongoing treatment.