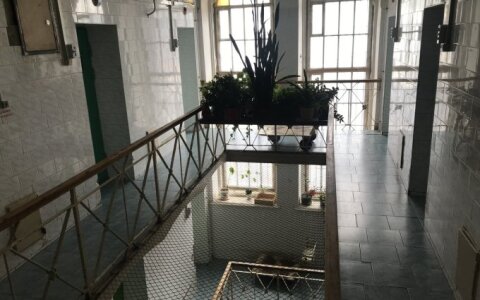 The Seimas Ombudsman Augustinas Normantas, in his latest thematic report on the human rights situation in detention facilities, notes that following the urgent transfer of convicts from Lukiškės Remand Prison to other prisons, the Seimas Ombudsmen’s Office received a significant number of complaints, and the constant flood of information about the potentially violated rights of transferred convicts has raised his concerns about the current situation.

The report presented by the Seimas Ombudsman assesses the quality of detention of prisoners, the conditions of detention and hygiene, as well as the provision of material and domestic supplies. The Seimas Ombudsman notes, however, that one of the most sensitive topics assessed during the investigation was the transfer of convicts.

'When transferring the convicted persons to other prisons, most of them were informed about the transfer less than one day before the start of the transfer procedure. There have even been cases when prisoners were not informed about the transfer at all and had only one hour to prepare. Therefore, the convicted persons were neither allowed to appeal against such decisions nor to inform their close ones about the changed place of execution of the sentence,” highlights the report on human rights monitoring signed by the Seimas Ombudsman A. Normantas.

The report of the Seimas Ombudsman also draws the attention to the fact that the place of residence of the convicted persons or their relatives has not been taken into account when allocating the transferred prisoners to new places of imprisonment. During the investigation, the convicts explained to the Seimas Ombudsman that expectations and requests to continue serving their sentence in penitentiary institutions selected according to their relatives' place of residence received formal answer from the Prison Department, noting that there is no legal obligation to take into account whether relatives are able to visit convicted persons, the distance from home or other preferences.
“The transfer of convicts to the imprisonment institutions that are far away from home causes a great deal of inconvenience to relatives who wish to visit them. Increased travel and time costs lead to less frequent visits by them, which naturally creates barriers to keep in touch with their relatives. For close relatives with poor health or special needs, meetings with convicts have become extremely difficult or even impossible, as longer distances are difficult for these individuals to cover, “ emphasises the Seimas Ombudsman in the report.

“In the specific case, four of the convicted persons transferred to Alytus Correctional Institution had attended a secondary school before being transferred. However, during the investigation, the administration told us that the information on the education of these convicts had not been available before their transfer to the institution, and consequently, after their transfer, the convicts were not able to continue their education. Moreover, the convicts who had been in the 12th grade before their transfer were unable to take the Lithuanian language and literature exam,“ highlights the clothed report.

Due to the extremely dim lighting in the cell-type premises, the Seimas Ombudsman Mr Normantas addressed the National Public Health Center regarding the control of natural lighting. The results of the study revealed that the correctional cells' natural light levels do not reach even the lowest analogue of natural light limits: “Natural light source is extremely important for a person since it helps to maintain proper emotional balance, reduces the possibility of depression”.

Having carried out an assessment of the human rights situation in prisons and summarising the conclusions of the investigation, the Seimas Ombudsman also made recommendations to the Prison Department obliging it to take measures to ensure that prisoners would have adequate conditions of detention, hygiene, material and domestic supplies. He also recommended that all transferred convicts be provided with the opportunity to continue their education and work, in such a way ensuring appropriate social rehabilitation of prisoners.

In his report, the Seimas Ombudsman also issued a special recommendation to the Minister of Health Aurelius Veryga, in which he pointed out the need to ensure that the hygiene standard approved by the Minister regarding health and safety requirements in places of detention was supplemented with the requirement of natural lighting in penitentiary cells.