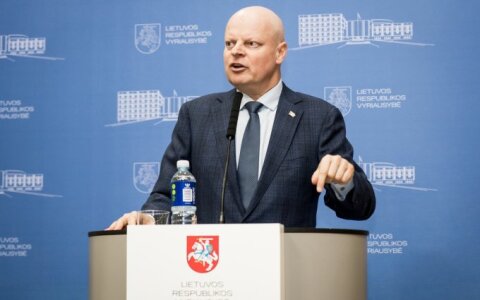 Lithuanian Prime Minister Saulius Skvernelis, who is being treated for lymphoma, says his own case illustrates how cancer patients are discriminated against in the country.

"(...) we see a perfect illustration of discrimination against a person who suffers from an oncological disease," Skvernelis told reporters on Wednesday.

"Had I got a runny nose, the flu, on Monday and Tuesday, or been treated for alcoholism for a couple of days, as some politicians have, everything would've been alright," he said.

"But if I need to undergo tests that cannot be done at the government building and take sick leave, which I'm entitled to, for the seventh day in two months and a half, some see this as a problem and say the prime minister must be fired because he can't perform his duties."

Skvernelis cancelled a scheduled meeting with his Norwegian counterpart, Erna Solberg, who visited Vilnius on Monday, due to his health condition.

According to the prime minister, comments by some politicians and political commentators appear to imply that a cancer patient must by sacked because he or she is "different".

"When this comes from commentators, university professors (...), or fellow politicians, that's pathetic," he said.

Skvernelis, who was diagnosed with stage 1 lymphoma, a type of blood cancer, earlier this year, said he would have his final chemotherapy treatment this week.

"And I'll see then, and if I want, I'll take a rest for a month, two months or a week (...). I have the right to be ill like any other resident of the Republic of Lithuania," he said.