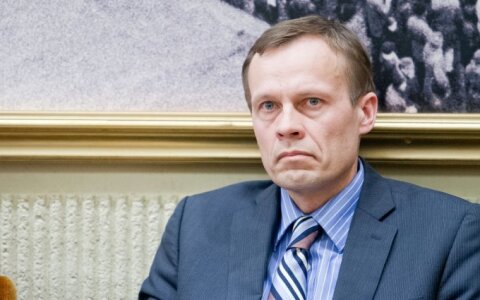 The Lithuanian Ambassador to Turkey was summoned to the country's Ministry of Foreign Affairs for a conversation on the conflict in the Ottoman Empire during World War I following Lithuanian President Gitanas Nauseda's statement on Armenian genocide.

But the ministry did not lodge a formal protest.

The meeting of Ambassador Audrius Bruzga and Aylin Tashan, a representative of the Turkish Foreign Ministry, took place in the second half of November, the Lithuanian Ministry of Foreign Affairs confirmed it to BNS.

"One of the topics of the meeting was the countries' attitude to the events of 1915, which part of the international community sees as Turkey's genocide of Armenians," the ministry said.

No diplomatic note was presented during the meeting, the Lithuanian Ministry of Foreign Affair said.

The meeting was held following Lithuanian president's interview with the Lithuanian news website delfi.lt when Nauseda responded to the journalist's question: "Turkey is a NATO ally that carried out genocide of Armenians, which, by the way, Lithuania recognizes, and the US Congress has recently recognized as well. Turkey does not recognize the fact of genocide. Could you imagine a situation when a NATO member country would not recognize the Holocaust?"

"I couldn’t imagine that. But, despite that, speaking of this issue (of recognition of Armenian genocide), I would think it's a matter of time, and it will happen some day. Perhaps it will not happen very quickly. No matter how hard it would be to expect for that to happen over the next five or ten years, but I think the very fact exists and it will be recognize one way or another," the Lithuanian president said.

Speaking with Lithuanian journalists in London on Tuesday, Nauseda said he doesn't believe his statement would affect bilateral relations with Turkey or Turkey's position on NATO's defense plan for the Baltic states and Poland, now under consideration.

"That is, I would say, a thing that is always in the margins, and, as you know, parliaments of various countries, including the US Congress, and Foreign Ministries have expressed their positions on these issues. But that in now way means that any decisions need to be made tomorrow and not later," the head of state said.

"We were just speaking about that event and its historic assessment, and that's all," he added.

In a resolution in 2005, the Seimas of Lithuania recognized that the Ottoman Empire carried out "genocide of the Armenian nation" during WWI, but heads of diplomacy from around the world refrain from using this term strongly criticized by Turkey.

Turkey rejects the genocide term, stating that up to 500,000 Armenians were killed during the conflict, and a similar number of Turks.