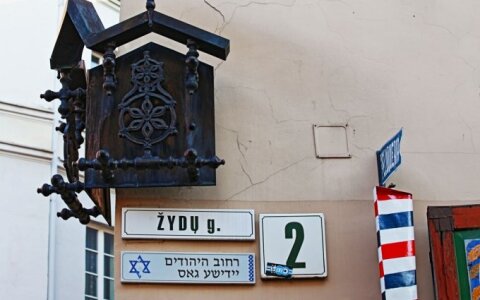 A monument to Jew savers is planned to be built in Vilnius over the next couple of years.

Lithuanian Culture Minister Mindaugas Kvietkauskas has set up a working group to consider the concept of such a monument and set conditions for a creative idea tender.

"We have been planning for a couple of years now to build a very important monument for the memory of our state and nation. A monument for Holocaust-time heroes, Jew savers, and Righteous Among the Nations," the minister told BNS. "We really need to implement this project that is very important for our memory."

The working group including representatives of the Culture Ministry, Vilnius City Municipality, the Government Chancellery, the Jewish Community of Lithuania, the Union of Painters, and the Genocide and Resistance Research Center of Lithuania will decide on the conditions of a creative idea tender over the upcoming few months.

Related articles
Researchers: Lithuanian author Cvirka actively collaborated with Soviets
Head of Holocaust memorial would like info to be available in Lithuanian as well

"We plan that the tender could be called in the spring. And the monument would be built in 2021," the minister told BNS.

The monument would be erected on Onos Simaites Street in central Vilnius as the place is related to the history of the Vilnius Ghetto, the culture minister said.

The monument's erection will be funded by the state, with the Vilnius authorities taking care of the project's implementation.

Almost 900 Lithuanian residents have been declared Righteous Among the Nations by the Israel-based Yad Vashem Institute.