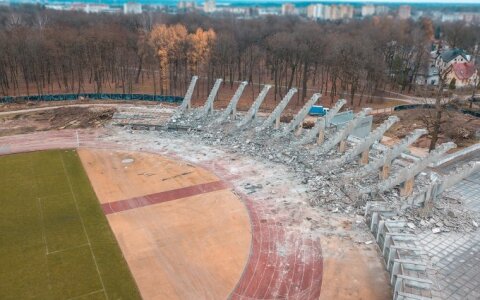 The authorities in Kaunas, Lithuania's second largest city, on Friday announced their decision to cancel their contract with Turkish company Kayi Construction on the reconstruction of a local stadium.

Kaunas Mayor Visvaldas Matijosaitis said the Turkish company had "exhausted the whole confidence credit given to them".

"We gave them enough chances and time to resolve the existing problems for work to continue smoothly but we see that they have failed to make use of it. Now the city is taking over the initiative. We need to ensure that the stadium construction continues and is finished successfully," the mayor said in a statement.

"Some time will be needed to hold the tender for a new contractor but we will do everything to ensure the unavoidable pause in work is as short as possible," he said.

"We are analyzing and evaluating the grounds for the termination of the contract (...). We'll then decide whether or not to go to court," he said.

The contract is being cancelled after 52 Turkish citizens reconstructing the stadium went on strike over pay arrears late last year.

Kaunas Municipality said on Friday it had notified Kayi Construction of the launch of the contract termination procedure, giving the contractor's failure to adhere to the project timetable as one of the reasons.

The municipality said the company had contracted to bring 400 workers and most of the necessary construction equipment from Turkey. However, the contractor still does not have the construction capacity and leases the building equipment used on the site from Lithuanian subcontractors.

Moreover, creditors' claims of non-payment by the Turkish company for building materials, designing work and other services have reached the municipality. The contractor even failed to pay for food supplied to its workers, according to the press release.

Kaunas Municipality directly settles with the majority of subcontractors under trilateral contracts and has fully paid the Turkish company for all work completed to date, it said. 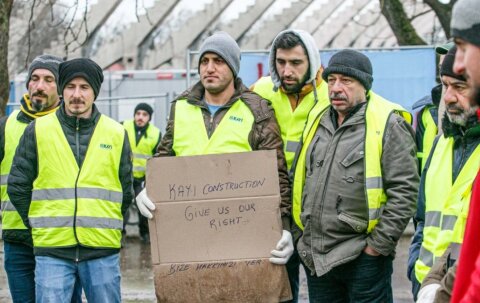 The city will claim 2 million euros from the contractor for its failure to comply with the essential terms of the contract.

Kayi Construction to decide on next step

Alper Dedeoglu, deputy project manager at Kayi Construction, told BNS they had no official information about the cancellation of the contract yet.

"I am also checking from the media; we didn't receive the official information yet. I think we will soon, because I've got this news from many channels," Dedeoglu said.

"We will see what the next step is," he added.

The deputy project manager said the work on the site had stopped recently due to technical problems.

"We had some meetings with the municipality last week and this week; we know the problems. Also, two days ago we stopped works because of the technical project problems," he said.

New contractor to be found within a few months

The stadium was originally scheduled to be finished in the spring of 2020, but the expected completion date was pushed back to later this year after it became clear that some of the existing structures will have to be rebuilt.

According to the municipality, only one-fourth of all work has been done to date. Workers have demolished stadium structures, installed utility lines, and started building an underground car parking area and VIP boxes. 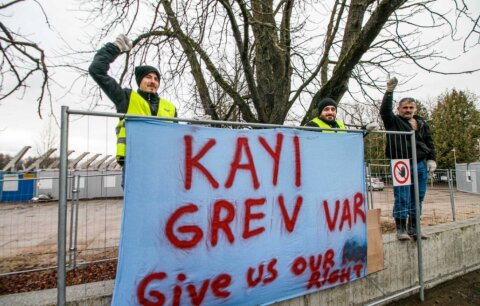 "The Turkish company's inability to manage the processes had a direct impact on the pace of construction. It is a shame that precious time is wasted because of that. We cannot wait any longer," said Vilius Siliauskas, the director of administration at Kaunas Municipality.

"We hope that the new contractor will do the remaining work well and as quickly as possible," he added.

Kaunas Municipality signed the contract, worth 34.95 million euros, with Kayi Construction for the reconstruction of the Darius and Girenas Stadium in June 2018.

Following the cancellation of the contract, a new tender process will be launched. The city expects to find a new contractor within a few months.

The renovated stadium will have 15,000 seats, up from 9,500 previously, and will comply with the UEFA category 4 requirements.