Suspicions brought against 2 more people over fire in Alytus 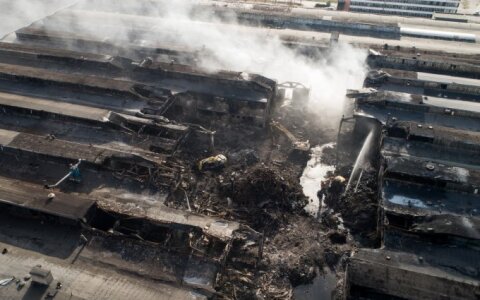 Suspicions have been brought against two environmental protection officers over a huge fire at a tire recycling facility in Lithuania's southern city of Alytus, prosecutors from Lithuania's second-largest city of Kaunas said on Monday.

The two environmental quality control specialists from Kaunas, Ausra Bruziene and Ausra Kriceniene, are suspected of failure to carry out their duties. Suspicions against them were brought on Friday.

"Both specialists refuse to cooperate with law enforcement institutions as part of the pre-trial investigation, refuse to provide evidence and explain the incident's circumstances. They have signed obligations to stay at a designated place," prosecutors said.

All in all, five people are not considered suspects as part of the investigation into the fire at Ekologistika facility, including the company's manager.

The Criminal Code stipulates a fine, arrest or prison terms of up to six years for actions they are suspected of.

The devastating fire at Ekologistika broke out on October 16 and it took more than a week to deal with the fire and its consequences.

Suspicions brought against 2 more people over fire in Alytus