Pieces of paraffin wax-like substance on beaches traced to Russia 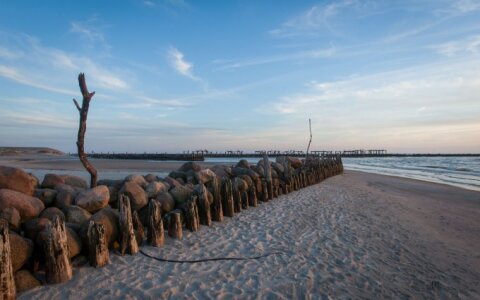 Pieces of a substance similar to paraffin wax that were found washed up on Lithuania's beaches last week apparently came from Russia's Baltic Sea exclave of Kaliningrad, the Environmental Protection Department said on Monday.

"The Environmental Protection Agency was asked to perform a backward modeling of pollution dispersion, which revealed that the substance could have come to Lithuania's territory from Russia," Ieva Krikstaponyte, the department's spokeswoman, told BNS.

The agency's experts have taken samples of the substance for analysis.

The Curonian Spit municipality of Neringa has said pieces of white substance, believed to be paraffin wax, were first spotted on the beach on January 23.

The municipality has invited volunteers to come to the Nida and Juodkrante beaches on Tuesday to help collect the waste.

Smaller amounts of the substance have been washed ashore at other the Curonian Spit settlements, too, it said.

Pieces of paraffin wax-like substance on beaches traced to Russia