Passenger taken to hospital from Vilnius Airport released, not tested for coronavirus 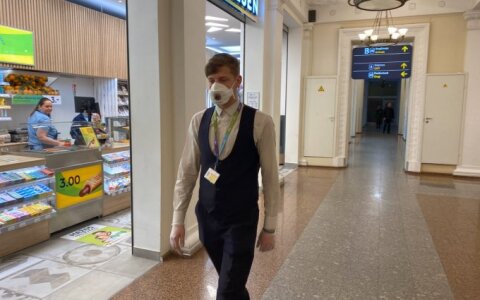 A passenger who was taken to the Center of Infectious Diseases of the Santara Clinics on Thursday was released later the same day after being diagnosed with seasonal flu. He was not tested for the new coronavirus as there were no symptoms of this infectious disease, medics said on Friday.

Lina Businskaite, spokeswoman for Health Minister Aurelijus Veryga, told BNS the man who flew to Vilnius from the United States via Warsaw was released home on Thursday.

"The man was released yesterday, and the minister was informed by the head of the Santara Clinics. As the ministry said initially, the case is not related to the coronavirus infection. A sample was not sent to the National Public Health Surveillance Laboratory," Businskaite said.

Edita Kazenaite, deputy director of the Santara Clinics, said tests done within an hour showed the man had seasonal flu and was immediately released home for treatment.

Responding to information, specialists from the National Public Health Center and other services, met an airplane from Warsaw at Vilnius Airport with a man who had informed a private clinic about his state. The man was taken off the plane to the Santara Clinics, and also around half of 45 passengers on the plane were questioned,"

Lithuanian institutions are taking additional precautionary measures to prevent an outbreak, with NPHC specialists being on standby at Lithuania's three airports and the port of Klaipeda.

Health specialist pointed out to the fact that the mortality rate from the new virus stands at around 2 percent and is considerably lower than that of the SARS virus which killed around 10 percent of the infected people 17 years ago.

Passenger taken to hospital from Vilnius Airport released, not tested for coronavirus