Research: what life at home looks like during quarantine 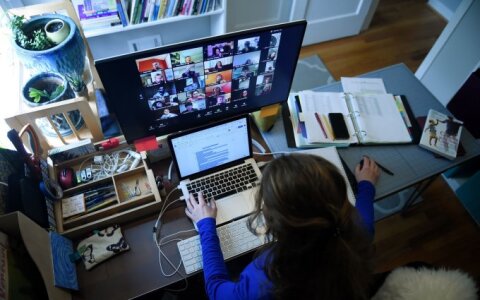 The ongoing quarantine have closed Lithuanians at home for almost the longest time so far. IKEA research shows that most people spent this period of self-isolation in couples, but one out of ten had extremely lonely weeks. Moreover, the research reveals that prolonged ‘stay at home’ period did not make Lithuanians love their homes more, nevertheless they have used this free time for home organizing and learning new things, the company writes in a press release.

The majority of self-isolated Lithuanians said they were worried about country's economy (45%) and their personal financial situation (44%), and 43% answered that they were concerned with their health.
On the other hand, some treated this situation as me-time: almost one-third of respondents said they were happy with it (31%), others took the chance to slow down and relax (21%). One out of ten mentioned they had conflicts at home more than usual. However, the majority (70%) claimed they stuck to established daily routines.

Every third worked from home

Almost 70% of respondents said they had significantly reduced the frequency of their shopping or other trips from home. 42% said they spent almost all their time at home and even avoided walks in their neighbourhood. Some Lithuanians enjoyed fresh air in their balconies (30%) or in the surrounding forests and other places far away from their homes (19%).

‘These tendencies do reflect in behaviour of IKEA customers too. At the beginning of quarantine, many of our customers rushed to buy home office furniture for themselves and for children learning from home. As the weather warms up, outdoor furniture is more and more often included in the shopping cart. Though, we have observed customers’ efforts to improve their life at home during the whole quarantine: people buy kitchen furniture, bedroom furniture and accessories that help to keep things organized.” says Jolita Juodzevičienė, Market Manager, IKEA Lithuania.

Learned to spend time together and cook new dishes

According to the research, 41% of respondents were learning to spend time with their families while staying at home, whereas 28% showed interested in cooking and were looking for new recipes. Another 23% have introduced new routines at home – disinfect surfaces more regularly.
Almost one-fifth of Lithuanians learned new ways of shopping while staying at home during quarantine, i.e. to shop online. Other 17% answered that they have learned to communicate with friends remotely and 15% started exercising at home.

Research: what life at home looks like during quarantine