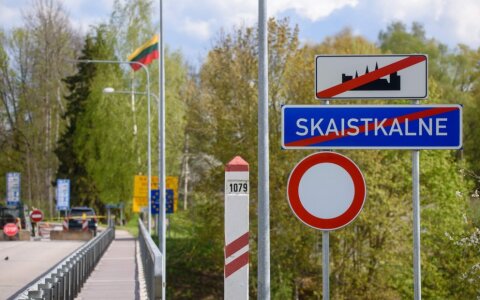 “The chiefs of border guard services of the Baltic countries [earlier] agreed to launch an information exchange system on May 15. We use that system to exchange information about our countries’ nationals arriving from other than Baltic countries… We receive notifications about approximately 100–150 Lithuanian nationals arriving to Latvia or Estonia via the external border, airports or seaports on average each day,” Rustamas Liubajevas, the chief of SBGS, said at a news conference.

This information was also sent to the National Public Health Center and the police, he noted.

“As regards those our citizens who arrive from other than Baltic countries, the data of these individuals is known and the Lithuanian police or other institutions may carry out preventive checks,” Liubajevas added.

Meanwhile, Interior Minister Rita Tamasuniene called on the country’s citizens to act in good will and reminded that, until June 1, all people arriving to Lithuania from abroad through the Baltic countries were obliged to self-isolate for 14 days.

“Some people say that it may be possible to cheat and not to disclose the country of departure when crossing the border. However, our State Border Guard Service gets that information, maybe not at the time of border crossing, but it gets that information later,” the minister noted adding that the restrictions would be relaxed in June.

From June 1, Lithuania will allow entry for people arriving from the countries with the coronavirus morbidity rate not exceeding 25 cases per 100,000 residents over the previous two weeks.

Those arriving from such countries will not be required to self-isolate for 14 days.

The list of countries concerned will be announced by Health Minister Aurelijus Veryga each Monday.

If such a list were to be compiled now, it could include Iceland, Slovenia, Greece, Croatia, Cyprus, Norway, Hungary, Switzerland, the Czech Republic and Austria.

Lithuania introduced a lockdown on March 16 in a bid to contain the spread of novel coronavirus. On Wednesday, the lockdown regime was extended until June 16.