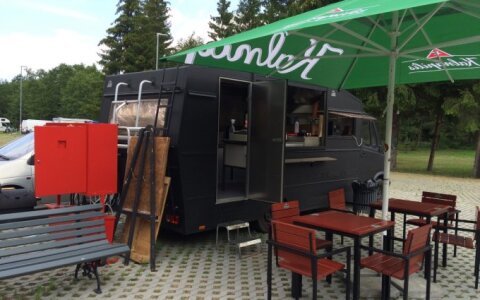 The Square of the Constituent Seimas and the Daugirdas Amphitheater are two new places where Kaunas residents and guests will be attracted by not only the picturesque fountain or the Nemunas coast, but also appetizing food flavors. Until now, food trade from specialized cars was allowed only during mass events and at Lake Lampėdis and Kaunas Lagoon. According to the decision of Kaunas City Council, from now on it will take place in the city center as well.

“The food trucks, which have become very popular, have not had attractive places in the central part of Kaunas so far, therefore they could only operate during the Open Kitchen and other events of a similar format. We received requests from entrepreneurs to trade in the Old Town or its accesses, but bureaucratic processes complicated everything. From now on, new places for food trucks have been chosen so as not to interfere with cafes and give people the freedom to choose where and how to spend time enjoying food, ”said Kaunas Deputy Mayor Andrius Palionis.

According to the Deputy Mayor, from now on, authorization procedures should be faster and simpler, avoiding complicated formalities.

Owners of tidy food trucks producing delicious food will soon be able to withdraw their permits and start trading in the Square of the Constituent Seimas or on the Nemunas embankment at Kaunas Old (Daugirdas) Pier. “It will be possible to trade in Daugirdas Amphitheater until the beginning of the reconstruction of Santaka Park. We hope to have a contractor in June and start real work soon. However, bureaucratic procedures often take time, so until all the documents are arranged, Kaunas residents and guests of the city will be able to enjoy delicious food”, explained Radeta Savickienė, Head of the Environmental Protection Department of Kaunas Municipality.