Sabonis to lead basketball federation for another year 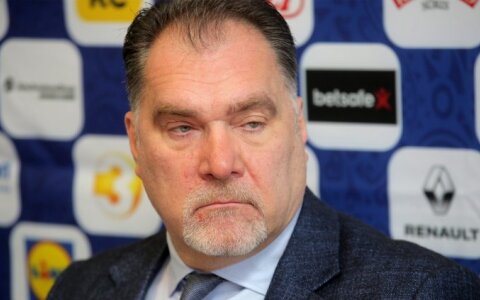 As the coronavirus has affected the basketball schedule in Lithuania, the Lithuanian Basketball Federation's Executive Committee has on Tuesday decided to extend the term of its president Arvydas Sabonis for another year and elect a new president after the upcoming Olympics.

"And the president agreed to continue work, and the Executive Committee has already voted and endorsed everything," Vaidotas Zajarskas, spokesman for the federation, told BNS.

Sabonis' second term was set to expire in early September. He said during the Tuesday committee sitting that the existing situation forced him to stay in the position.

"The situation is extraordinary and it wouldn't be nice if a new colleague came in such a situation. It would be hard for the person. I agreed to continue working and hope that the men's team will manage to get into the Olympics," Sabonis was quoted as saying in a statement.

Sabonis has been leading the Lithuanian basketball since late October, 2011 when he repalced the federation's long-standing president Vladas Garastas.

Sabonis to lead basketball federation for another year