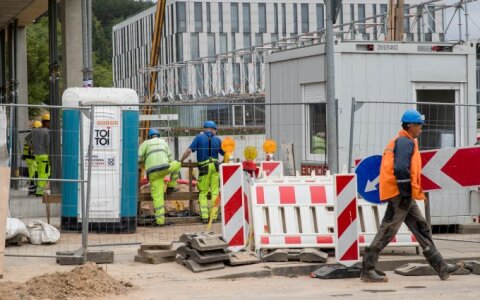 Workers from Ukraine and Belarus can come to Lithuania more easily after the end of quarantine in the country.

Evelina Gudzinskaite, head of Lithuania's Migration Department, says not only foreigners who permanently reside in Lithuania or already have a valid work permit but also those who will be issued national visas for work will be able to come to Lithuania.

Lina Businskaite, spokeswoman for the Lithuanian health minister, said workers from third countries would not longer be required to self-isolate for 14 days upon arrival to Lithuania and will only be advised to do so.

She added, however, that if such a recommendation was ignored, and people were infected, flouters might face legal liability.

"Isolation will be recommended after the quarantine is lifted, and it will not be mandatory," Businskaite told BNS.

Haulers had no major disruptions, no influx expected

Mecislovas Atroskevicius, head of the Lithuanian National Road Carriers’ Association LINAVA, says haulers have not faced major problems on bringing workers in during the quarantine because the majority of Ukrainians and Belarusian working in Lithuania's transport sector have residence permits, therefore, they have been allowed to cross the border.

"New workers who wanted to come and get new visas might have probably faced problems. Our consulates have been closed and not accepted new documents. But those with labor contracts have been able to enter Lithuania as the place of their permanent employment without any restrictions," he said.

According to Atroskevicius, the lockdown lifting might be important for new incoming workers but demand for them should not be high dye to economic slowdown.

Builders: not many workers have left

A similar situation has so far been in the construction sector, with Dalius Gedvilas, head of the Lithuanian Construction Association, saying that only a very small number of workers left soon after the quarantine was introduced, and those who had work visas stayed in Lithuania.

"Those foreigners who had work visas, the majority of them stayed in Lithuania since, probably, they received a visa and had work, so they worked," Gedvilas told BNS.

In his words, many private construction projects are now suspended, and companies are working only on earlier started projects.

Therefore, Gedvilas said, there's a risk that once these projects are completed by the end of summer and due to the absence of new projects, the country's construction sector might not only not need new workers but it might also face a surplus of workers.

Gedvilas also said that the country's construction sector has a relatively small number of workers from Belarus and Ukraine. There are 100,000-110,000 people worked in this sector at the end of last year, and legally employed Belarusians and Ukrainians made only around 2,500.

It’s much easier to ensure safety in the construction sector, Gedvilas said, adding that a large part of work is done in open air and builders have also learnt the quarantine lessons.

Belarus and Ukraine have not taken the coronavirus under control, with some 600-700 new daily cases confirmed in these countries in recent days.