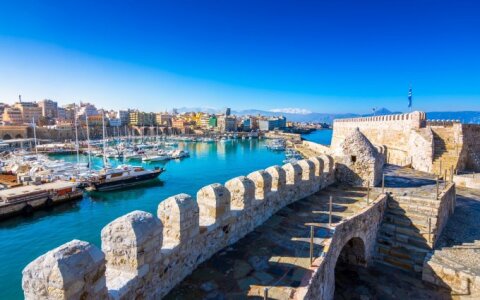 The Vice-Minister of Foreign Affairs of Lithuania Neris Germanas congratulated the Honorary Consul on his new appointment. N. Germanas said that Lithuania was interested in developing versatile relations with Greece, including with regions of Greece, especially Crete.

“Honorary Consuls have an important role to play in ensuring an intensified diplomatic representation of Lithuania. Therefore, the opening of the Honorary Consulate in Crete and the appointment of I. Giakoumakis as the Honorary Consul of Lithuania will undoubtedly contribute to the development of a long-term fruitful relationship and cooperation between our two countries in the areas of tourism, business, culture. It will also help increase people-to-people contacts,” said the Foreign Vice-Minister.

The Ambassador of Lithuania to Greece Rolandas Kačinskas noted that the opening of the Honorary Consulate of Lithuania in Crete had become a necessity. “Thousands of Lithuanians visit this country every year. Bearing in mind the impacts of COVID-19 on the European and global tourism, the importance of Greece (and Crete) as a major tourist destination and attraction in Europe will only grow”. According to R. Kačinskas, the Honorary Consulate in Crete will also help to develop and maintain the already established contacts with this Greek island, to promote cooperation between the municipalities of Crete and Lithuanian cities, to strengthen the relationship with the Greek Institute for Research and Technology, and to provide support for initiatives of the local Lithuanian community.

Y. Giakoumakis is a co-founder of and a Managing Partner at an investment consultancy and a private equity firm EMJ Partners. He is also a partner and the Managing Director in Giakoumakis Estate Agency & Property Developer – one of the leading real estate agents and property developers in Crete.