Nauseda: Lithuania will have to go back to financial discipline after corona crisis 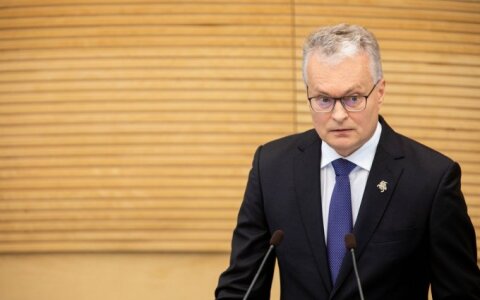 Once the coronavirus crisis ends and the economic situation gets back to normal, Lithuania will have to go back to financial discipline, which will involve efforts to lift some of the tax breaks and to ensure more effective tax collection, President Gitanas Nauseda said at an annual news conference on Thursday.

“I think that the measures pertaining to the tax-free income threshold and one-off payments, which have already been implemented, provide a really solid impetus to the economy and in particular the domestic market. If the situation gets back to normal at the end of 2020, I think we should go back to the financial discipline that we had at the end of last year, when many laws were being considered in this light,” he said.

Nauseda emphasized that the financial sector should behave entirely differently after the return to the normal economic rhythm, as compared to its behavior at the peak of the crisis.

“We have definitely not forgotten those legislative initiatives, which we put forward before the [approval of the] budget of 2020 and which target the reduction of certain tax breaks. I think we will get back to these initiatives and will consider them,” Lithuania’s state leader said.

When considering the budget of 2021, the president’s office would seek improvements in both the area of budget spending planning and the area of taxation.

“I am certain that it is not possible to achieve tangible results when you have many loopholes in the tax system and when you do not pursue far-reaching goals in the area of tax collection… I do not think anyone will be happy if we try to create a welfare state by the simplest way of raising taxes,” Nauseda said.

The new draft Law on Public Procurement, which had already been submitted to the Seimas, and a draft Law on Corruption Prevention, which would be handed over to the parliament in the near future, should help pursue those goals, he said.

“These laws should help us ensure more successful filling of our budget, reduce the number of tax breaks and avoid decisions that might decelerate economic development, undermine our competitiveness and generate poor results on our way towards the welfare state,” the president pointed out.

The president’s office earlier said that Nauseda’s proposal to enhance the efficiency and competence of the country’s public procurement system would help achieve the savings of approximately 500 million euros each year.

Nauseda: Lithuania will have to go back to financial discipline after corona crisis