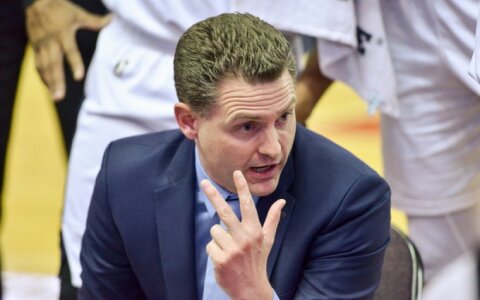 Zalgiris Kaunas has named Martin Schiller, a 38-year-old Austrian specialist, as its head coach, the basketball club said on Tuesday.

"I'm very thankful and very honored to coach this club with so much tradition," Schiller said in a video message to Zalgiris' fans.

"The work that has been done with Zalgiris in the last couple of years has been very good, and I want to keep pushing the program, keep pushing ahead," he said. "I’m looking forward to being part of the journey."

Schiller began his coaching career in 2004 and has spent most of it working in Germany, including as an assistant coach of the country’s national team, the club said in its press release.

He became the head coach of the Salt Lake City Stars in the NBA's G-League, and was named the Coach of the Year this season.

Schiller and Zalgiris have agreed on a two-year deal. He is replacing Sarunas Jasikevicius who has left the Kaunas cub to become the new head coach of FC Barcelona's basketball team.