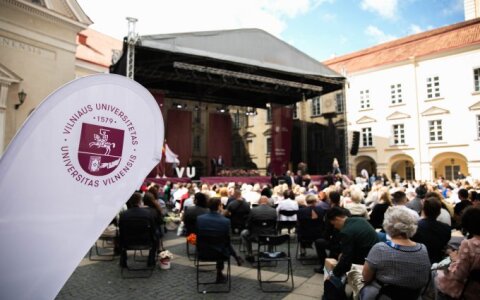 Vilnius University (VU) said on Friday it has launched a fundraising initiative to help Belarusian students and scientists persecuted by the regime of Alexander Lukashenko.

VU said the aim is to give a larger number of Belarusian citizens an opportunity to study and to accept scientists persecuted by the regime.

"The campaign is being launched in light of the intensification of repression by Belarus' official authorities against the country's academic community, with students, professors and researchers being expelled en masse from universities because of their civil or political activities," the university said in a statement.

in response to the ongoing political unrest in the neighboring country, VU has to date taken in around 90 Belarusian citizens. More than 50 of them are currently studying in bachelor's degree programs, and the rest in master's degree programs.

Some of the students are exempted from tuition fees and the most talented ones receive a monthly grant of 200 euros in the first year of studies.

According to VU Rector Rimvydas Petrauskas, "a shared history and solidarity with the society of the neighboring country oblige" the university to help Belarusians.

The political repression "cannot prevent Belarusians from receiving an education and developing their talents in an academic environment", he said.