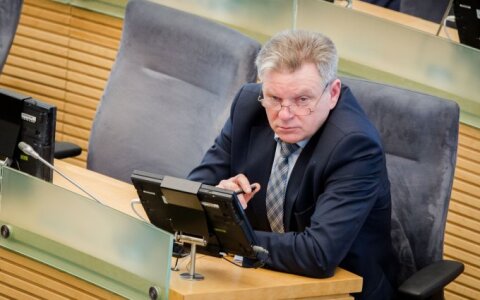 Jaroslav Narkevič, a member of the Electoral Action of Poles in Lithuania – Union of Christian Families, has expressed indignation over the refusal to register a group for ties with Belarus.

"The interparliamentary group of Good Neighborhood with the Republic of Belarus was established back in November. Eighteen members of the Seimas signed, up leaders were elected. However, the group has not yet been registered on the Seimas website, although this should have been done after the first meeting that elected the group's chairman and deputies, according to the Seimas Statute," Narkevič said at the end of the parliament's plenary meeting on Tuesday.

Parliamentary Speaker Viktoras Pranckietis of the ruling Lithuanian Farmers and Greens Union replied that the registration had been refused based on recommendations from the parliament's Foreign Affairs Committee.

Laurynas Kasčiūnas of the opposition conservatives suggested that members of the group should join the already existing group for support to the Belarusian opposition.

"Belarus does not have a free democratic parliament, therefore, founding friendship groups with facade institutions of an authoritarian regime is not a good practice for members of a democratic parliament. As far as I know, the Seimas Foreign Affairs Committee rejected the group and did a very good job, as the Seimas already has a group For Democratic Belarus, and my proposal to all members of the group is to join activities of our group," said Kasčiūnas.