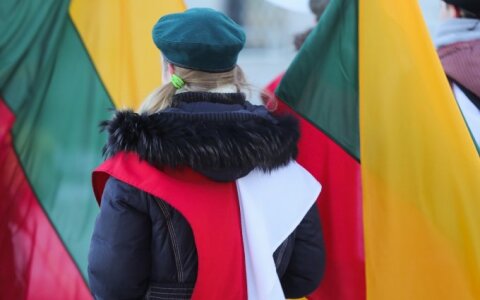 Lithuanian Prime Minister Saulius Skvernelis says that Vilnius and Warsaw are gradually moving to a new stage of better relations and hopes that Lithuanian politicians will solve the highly contentious issue of the spelling of Polish names in Lithuanian personal documents.

The prime minister, who on Tuesday met with local Lithuanians in the Polish town of Punsk, described Poland as a strategic military, energy security and economic partner of Lithuania, underlining that it is only Russia that benefits from disagreements between the two neighboring countries.

Relations between Vilnius and Warsaw have been marred in the past decade by their disagreements over the situation of ethnic minorities and over Poland's investment in Lithuania's sole crude refinery in Mažeikiai, but Skvernelis says that his government has started to tackle these problems.

"Solving issues that have not been dealt with for decades requires difficult decisions. We are working to take the relations between our nations to a different level. It is another state bordering Lithuania and Poland that gets benefit from what is marring our relationship," he told BNS by phone from Punsk.

The agreement put an end to court disputes between the companies. Other details of the deal are confidential, but Skvernelis said that it was beneficial for both sides.

Following the resolution of this dispute, Poland has recently started sending positive signals regarding Lithuania's efforts to synchronize its power grid with the Western European network and to block the import of electricity from the Astravyets nuclear power plant under construction in Belarus.

Skvernelis says that Lithuania is determined to synchronize its grid with Western Europe via the existing LitPol Link interconnection with Poland even if the other two Baltic countries do not support it. Estonia does not back the project, at least for now, and insists on a second line to be built. Latvia has not yet stated a firm position on this issue.

According to the prime minister, any further delay in negotiations would increase the risk of energy isolation of the Baltic countries as Russia, in response to the Baltic states' publicly declared goals, is taking steps to enhance its capacities to ensure that the country's regions are not cut off from its energy system.

"The most realistic route (of synchronization) is through Poland. The only question is which of the other Baltic countries participate in the project. If we keep discussing for decades, we risk remaining an energy island. Poland is a key strategic partner here," Skvernelis told BNS.

However, most diplomats say that a major breakthrough, changes in rhetoric and top-level meetings can hardly be expected until national minority issues are resolved.

Polish officials call, at various levels, on Lithuania's authorities to ensure that Polish schools in Lithuania are not closed and to allow the original spelling of Polish names in Lithuanian passports and other personal documents.

Skvernelis is in favor of allowing the names of Lithuania's Poles to be spelt on the main page of their passports according to the Polish spelling rules and admits that such a move would help to substantially improve the relationship between Vilnius and Warsaw.

"Our position is (to allow) the three letters of the Latin alphabet (w, x and q) on the first page to ensure the spelling of authentic personal names for our citizens in mixed marriages and for members of the Polish national minority," the prime minister said.

"If we think about the geopolitical future of the state, we must overcome our myths, dogmas and inferiority complexes. We will see if we can do so," he said.

However, it is not clear yet if the prime minister's position will receive the backing in the parliament and the president's office. At the moment, there is greater support in the Seimas for a bill that would allow using the letters "x", "w" and "q", which do not exist in the Lithuanian alphabet, on the main page of an identity document for Lithuanian citizens who take the surnames of their foreign spouses, for children born in mixed families and for foreigners granted Lithuanian citizenship.

The bill would allow using letters of the Polish alphabet for ancestral surnames only on an additional page of one's passport.

Krzysztof Szczerski, secretary of state at the Polish President's Chancellery, is to come to Vilnius next week to discuss bilateral relations. Skvernelis is scheduled to pay an official visit to Poland in September.